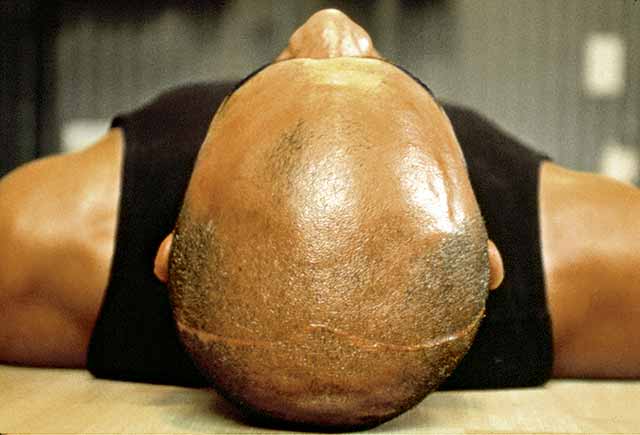 The setting of 7th Nov. — a backlit slide, a dark room, a voice over — contains the ingredients of cinema, namely darkness, light and photographic image, but it has brought them to a standstill. In an uninterrupted monologue, Marcus, the artist’s cousin, relates an event that would change his life forever: On the date that gives the film its name, he was attempting to put the safety on a gun and inadvertently loaded a bullet, which went off and fatally injured his brother. No selfpity, no accusations inform Marcus’s account. He speaks rapidly, in a British dialect that is hard to understand, as if he had already been asked to tell the story a thousand times over. The vivid report — an avalanche of words and emotions — prompts mental images. As if to prevent us from being carried away by this maelstrom, the projected image provides a handhold, linking the acoustic linearity with a fixed visual point: it shows Marcus lying down or rather, only the top of his shaven head in extreme foreshortening. A scar runs across his scalp, but how he sustained this injury is another story.