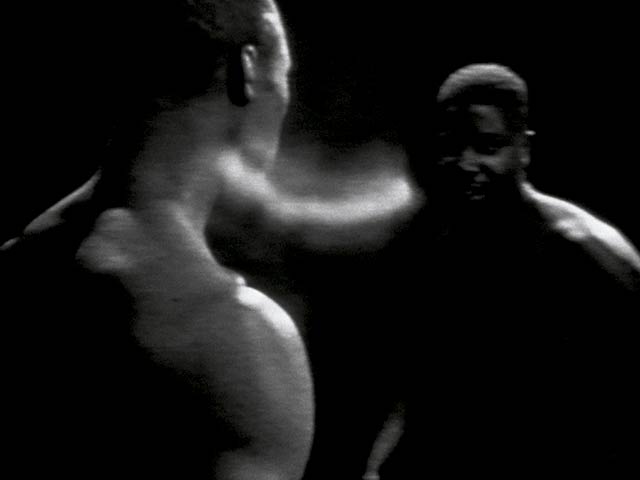 Steve McQueen filmed his first work Bear, while he was still attending Goldsmiths College in London. The film prefigures the formalist aesthetic of his early, silent black-and-white films with its emphasis on the cinematic vocabulary of experimental camera work, surprising viewpoints and contrasting montages. In Bear, we see two nude men engaged in an ambivalent fight that oscillates between aggression and comradeship, erotic pas de deux and playful tussle. Close-ups explore the faces of the artist and his opponent. The threatening tension generated by shot and countershot, by challenging gazes and movements, may end in laughter and friendly embraces only to give way to grim wrestling again. The lighting makes the figures appear soft and sculptural; sometimes they are seen as white silhouettes against a dark background; sometimes they fade into blinding spotlights. From a low vantage point the camera follows the rotating moves and agile jumps in slow motion.