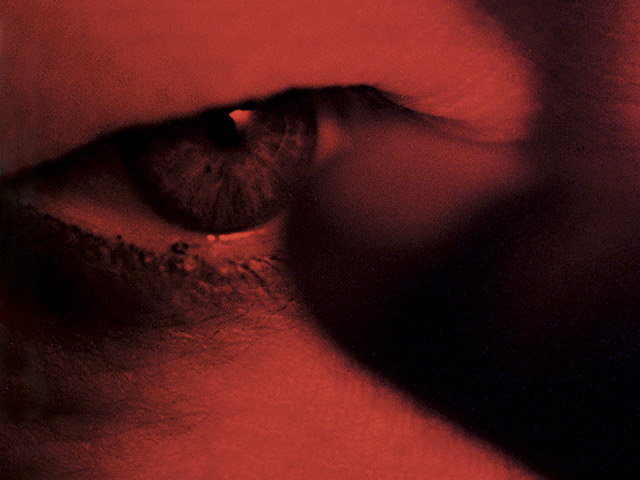 Completely suffused with red, the image in Charlotte shows a close-up of British actress Charlotte Rampling’s eye, threateningly approached by the artist’s outsized finger. The cropped image keeps going in and out of focus. In analogy to the camera eye, the lens of the actress’s eye must continually adjust to the approaching finger, which comes closer, kneads the eyelid, strokes it and smooths out the wrinkles in the skin. Viewers cannot help sharing the almost unbearable sense of vulnerability that wavers between excitement and menace. Finally the fingertip touches the eyeball. For a moment the eye tolerates this incursion, then the lid blinks several times as if to wipe the touch away. The raw and tender intimacy of this duel is as erotic as it is fragile.

Charlotte can be read as a metaphor for visual manipulation and, at the same time, for the revelatory potential of film. As implied by the parallel between camera and eye, the work constitutes an intimate homage to this icon of European cinema — and especially to the legendary radiance of her eyes. The impact of the film is additionally underscored by the rattling 16mm projector in the background.