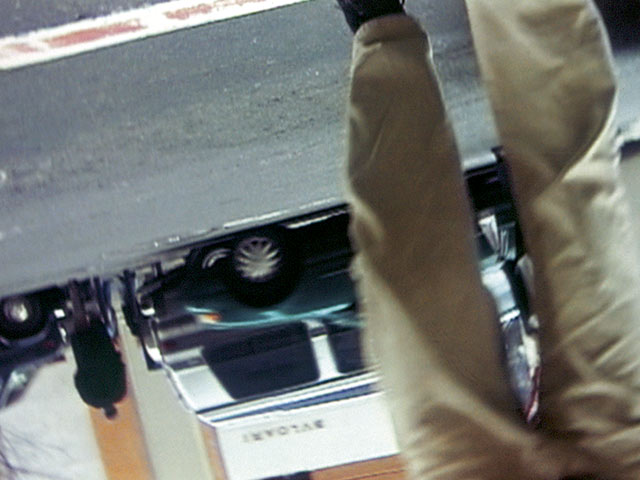 At first, the three-channel projection with its kaleidoscopically rotating images and ear-splitting noise is confusing. The two flanking pictures spin round in opposite directions, while the images sweeping by in the middle revolve vertically. For this work the artist fitted an oil barrel with three cameras filming through openings left and right and in front. He then rolled the construction through the streets of Midtown Manhattan. A few details flashing by reveal the location of the takes. On the left and right, cars on a busy street rotate as if in a washing machine, including New York’s iconic yellow cabs. We glimpse garbage cans, highly polished marble foundations, construction scaffolds and elegant shoes displayed in shop windows that also reflect the artist and his rolling drum. People walking alongside at the same speed appear to rotate around their own axis as if in a hamster wheel, while images revolve vertically at great speed from skyscraper to sky to asphalt street down the middle. The artist warns passers-by of the approaching drum; occasionally, we hear “excuse me, excuse me” above the sound of the loud drumroll made by the barrel on the asphalt. Several times, McQueen moves from one side of the street to the other and at the end, he turns the barrel upright: the image turns black on the left and the sky suddenly appears on the right. The walk, recorded as a continuum, comes to a definite end after all.