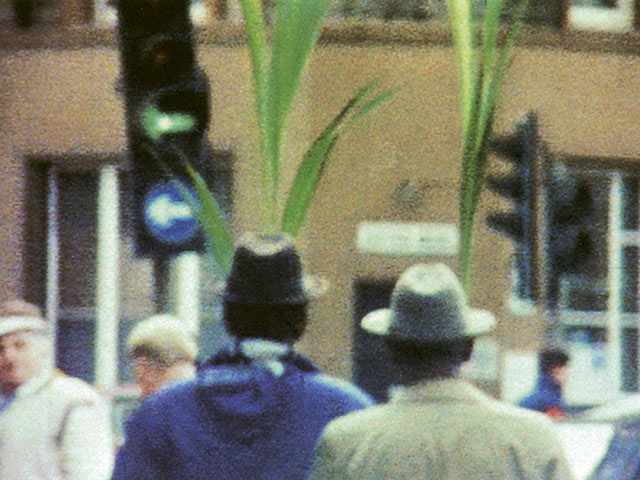 In the space of only one minute and five seconds, Exodus presents a self-contained narrative, reduced to the minimum, with characters, plot, beginning and end. Two men ply their way through a crowd in East London, both carrying coconut palms which are seen swaying above their heads as they walk. The camera follows the two men, then loses one of them as they cross the street. The two join up again on the other side and board one of London’s red doubledecker buses. The camera fixes on the vehicle until the two figures with their palm branches appear in the rear window. They have evidently noticed that they are being filmed because one man turns to laugh and wave at the camera. The grainy image, the unstable hand-held camera and the glances of the passers-by testify to the documentary, spontaneous nature of the film. Early on, the artist used to take his Super-8 camera along in order to practice looking through the viewfinder. He captured this scene in 1992, but did not show the film until years later.

The biblical title evokes the exodus of the Israelites from Egypt. The uprooted exotic plant – an ideal metaphor for migration and diaspora – is a curiously alien image in this context that lends vibrant movement to the filmed sequence.