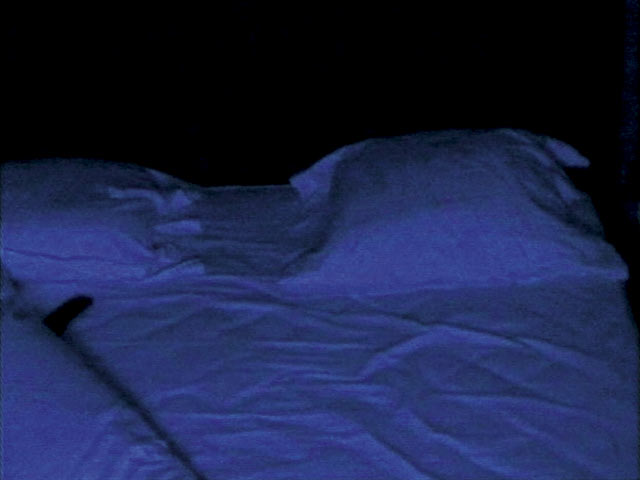 In the darkness we distinguish a figure stretched out on a bed with white sheets, hands behind his neck and feet facing the camera. This spontaneous take, made in Paris with a simple digital camera, has a voyeuristic effect as viewers watch a person lying alone in an anonymous hotel room. The flickering light and the voice of a narrator indicate that there is a TV at the bottom of the bed; it is broadcasting a French programme about the training of American special forces for a mission in Afghanistan. The illumination in the darkened room is defined by the light from the television. The digital camera, set on top of the TV, films the artist lying on the bed; only the contours of a dark figure are seen against the white pillow. The autofocus of the camera has trouble adjusting to the constantly changing intensity of the light from the TV, while the set itself remains invisible, and only fragments of the original English soundtrack and French commentary are heard. The light shining on the passive viewer plays on the question of whether mediated information about an external reality can ever be “enlightening”.