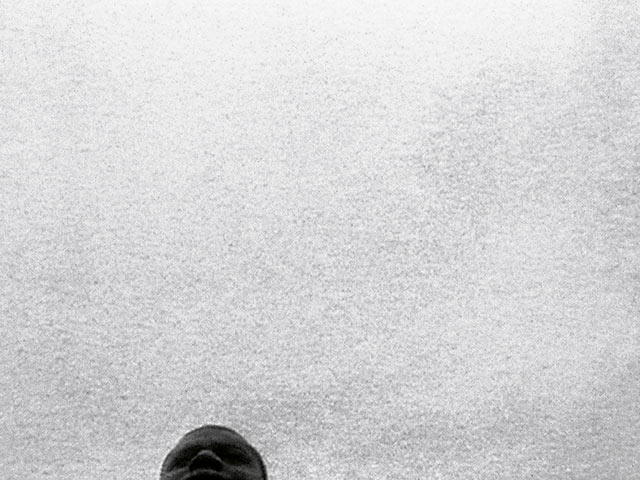 Just Above My Head is dominated by a great void. A bright cloudy sky spreads out above the artist’s head, and only part of his head is seen at the bottom of the wall-sized projection. The head bobs up and down as if the figure were trying to keep afloat. In a single, uninterrupted take, the camera films the silent, inexorably advancing figure from below. It continually adjusts to the figure’s irregular steps without ever showing more than his shoulders — the body remains out of frame. At the same time, the viewpoint is reversed, for paradoxically we have to look down in order to look up to the figure. Relaxed and serious, the man walks through an empty, indefinable space. Now and then a few branches pass over his head, just within grasp and yet out of reach. As fragments of the world, the lacy treetops, seen at the end of the film, counteract the seeming absence of gravity by generating a sense of place and rootedness. The film is named after African- American author James Baldwin’s novel Just Above My Head, 1979, which deals with issues of identity, racism and homosexuality.