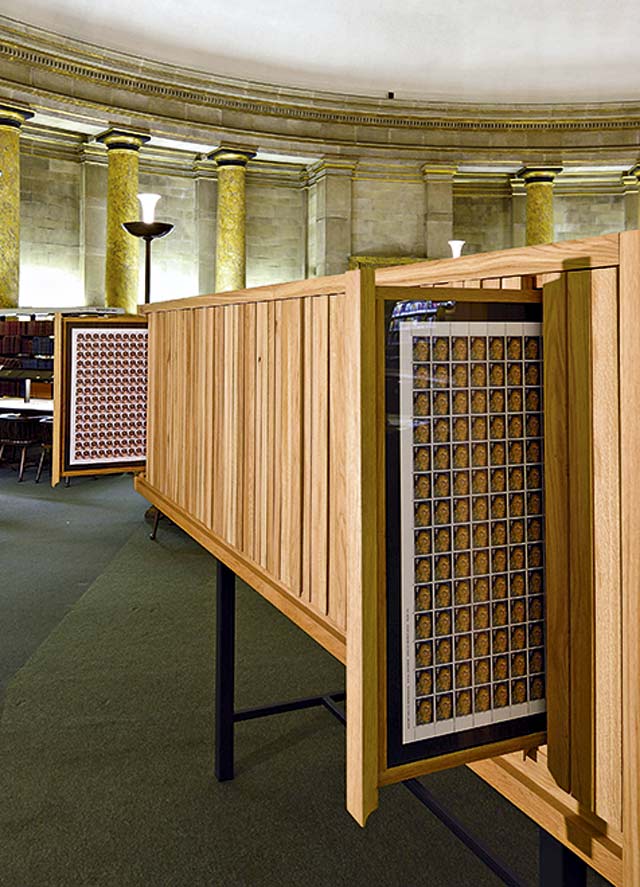 Steve McQueen was appointed official war artist by the Art Commissions Committee of the Imperial War Museum in 2003. When he went to Iraq to fulfil his mission, security measures made it impossible for him to film as planned. He decided to issue a series of postage stamps as a monument to the fallen British soldiers. The majority of the families concerned supported the project and contributed photos of their dead sons and daughters for the sheets of stamps. These facsimiles, each with the royal profile in a corner, are exhibited in an oak cabinet with drawers that pull out vertically. The cabinet has travelled to various institutions in Great Britain and over the course of two years grew into 160 sheets of portraits. However, for McQueen the work will remain incomplete until the Royal Mail has issued an official edition of the stamps, for only then will the purpose of Queen and Country be fulfilled: to commemorate the memory of the deceased by making a statement that everyone can participate in. Both the Ministry of Defence and the Royal Mail have hitherto blocked every initiative in this direction.

Throughout the Commonwealth a special day known as Remembrance Day or Poppy Day is reserved to commemorate those who have died in the line of duty. As a sign of solidarity, many people wear a red poppy on their lapel. In the case of a war still underway, commemoration is inevitably paradoxical, and when McQueen embarked on his project, British troops were still stationed in the war zone. Moreover, national glorification of such an extremely controversial operation as the Iraq war would necessarily have seemed forced and grotesque. McQueen’s series of stamps, being open-ended, eloquently commemorates the tragedy and inevitability of armed conflict. His work draws attention to the fate of individuals and its impact on the families and citizens of the United Kingdom. The small format of the postage stamp seems especially appropriate here. The persistent refusal to issue an official edition of the stamps merely serves to underscore the unabated relevance of Steve McQueen’s project.