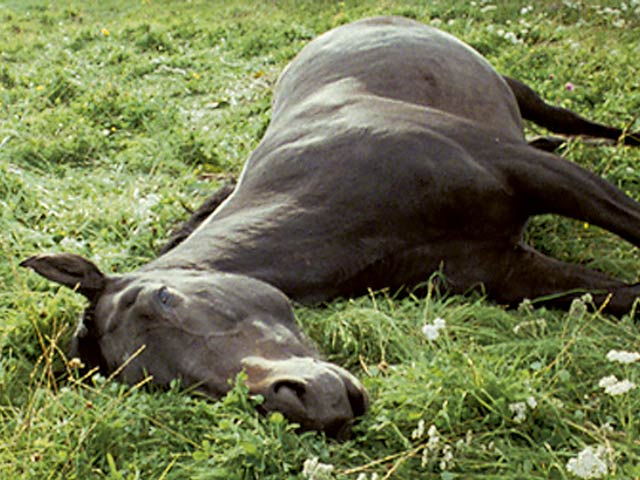 A horse is lying in a green meadow, an image made especially compelling by the artist’s framing. Blades of grass are swaying in the wind, a fly is seen circling around the animal and then crawling onto its eyeball — the horse doesn’t flinch. Soon we notice that the open eye never blinks, the tail does not shoo the fly away, the horse’s flanks are not rising and falling with each breath. The animal is dead and had apparently been lying there before the camera focused on it. The medium of film, defined by time and motion, is pulled up short by a static motif and the contradictory associations of speed, horse racing and power inherent in the title, Running Thunder. In the early days of photography, a fascination with the motion of a galloping horse, its steps invisible to the naked eye, inspired the chronophotographic sequences of Eadweard Muybridge. Yet here the animal remains motionless, like a still life (nature morte, in the more eloquent French). The horse transcends time through death but is once again made subject to time through its presence in the film.