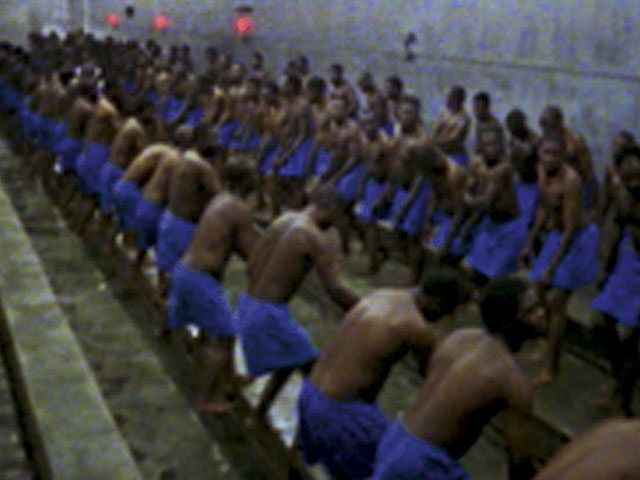 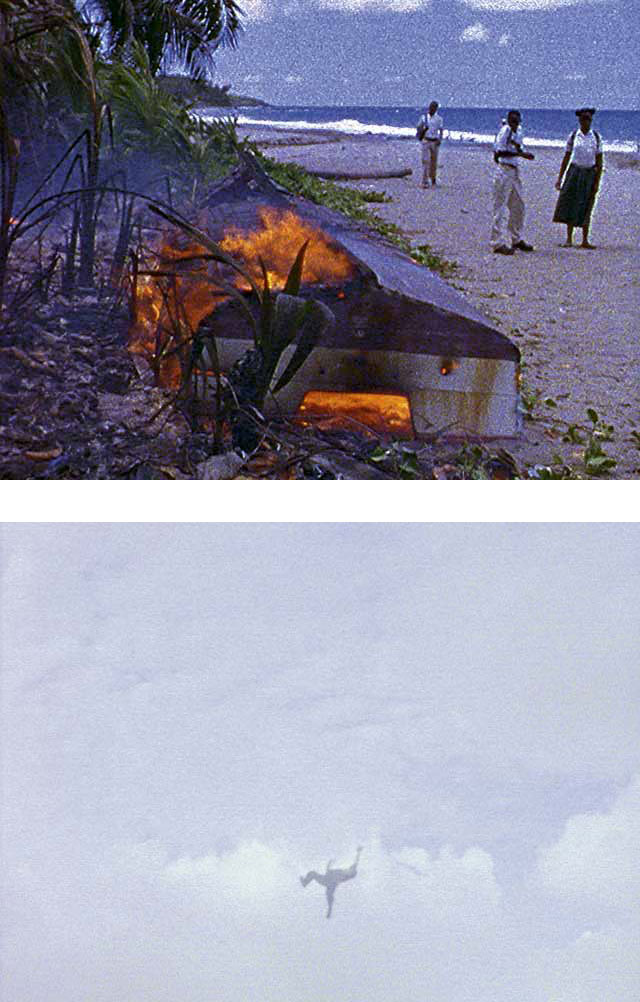 The two works Western Deep and Carib’s Leap, Steve McQueen’s first relatively long films, blur the distinction between documentary and fiction. Linked by images of falling or descending, they gel into allegories of repression and exploitation. They are always shown together in exhibitions but now, for the first time, the two-screen-projection Carib’s Leap, will be shown separately on the LED screens on the Schaulager’s outdoor façade. The exhibition thus begins outside, building a bridge to the works inside. The first minutes of Western Deep are plunged in darkness and even the occasional lighter sequences are difficult to identify. Gradually we distinguish blurred faces, helmets and a grid, and we realize that the camera is descending with miners into a dark shaft. The film was made in the world’s deepest gold mine, Tau Tona in South Africa, known under the Apartheid regime as «Western Deep». Though its subject matter is documentary, the film is not primarily concerned with a larger political and economic context. Instead, the actual consequences of miners’ working conditions are foregrounded. The supposedly objective camera eye faces the limits of what can be recorded in the diminishing light and refuses to oblige with an easily accessible reality. Filmed with grainy Super-8 film stock, the imagery is frighteningly claustrophobic and directly conveys the darkness, heat and pressure that typify the atmosphere in the mine. The hand-held camera was operated by Sean Bobbit, a cameraman with whom McQueen has repeatedly collaborated since.

One of the two video works in Carib’s Leap begins with an empty field of vision whose slight tinges of colour make it identifiable as a cloudy sky. Now and then a human silhouette falls slowly through the picture into the void. The other work documents a Caribbean scene. The daily lives of the inhabitants of the tropical island of Grenada revolve around the sea. Boats leave the coast or are pulled on shore, fishing nets are gathered in, children swim in the water and play on the beach. These scenes of leisurely life give way towards the end of the film to pictures from a morgue; the camera pans over bodies bedded in open coffins. In the year 1651, Grenada, where the artist’s parents originate, was the site of the unsuccessful battle between the local Caribs and the French colonial forces. Driven back to the northernmost point of the island, the rebels jumped off the cliff that now bears their name (Carib’s Leap), preferring the promise of eternal life over the prospect of captivity at the hands of the colonial masters. The two projections combine into a dialectical image of past and present – a past that survives only as a shadow in the present.